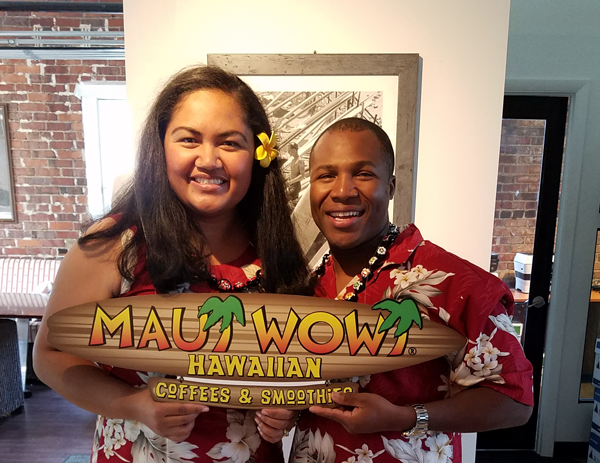 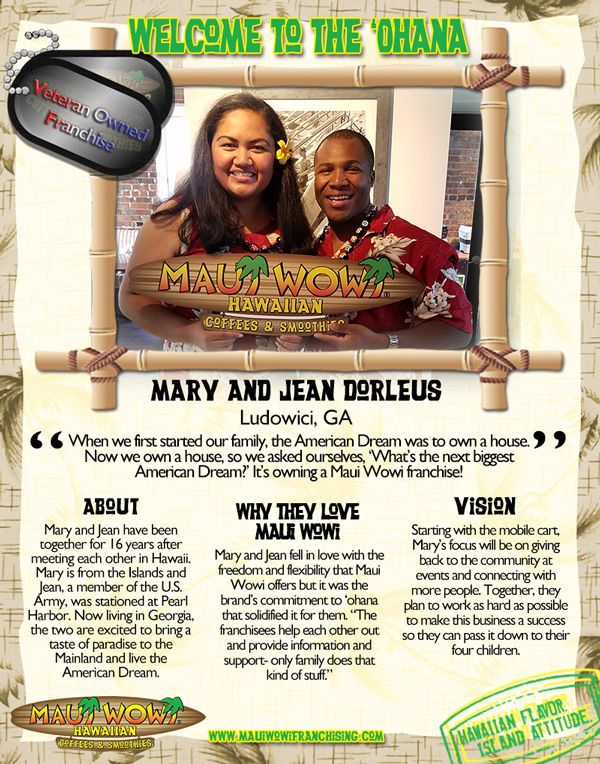 Maui Wowi’s® Military Veterans Discount was a big draw for new franchisees, Mary and Jean Dorleus. The two have been together for 16 years after meeting each other in Hawaii. Mary is from the Islands and Jean, a member of the U.S. Army, was stationed at Pearl Harbor. Now living in Georgia, the two are excited to bring a taste of paradise to the Mainland and live the American Dream.

Jean attended a conference for retiring military members and was introduced to the idea of franchising. When he was presented with Maui Wowi and the fact that it was a military friendly franchise that offered a discount to veterans, he was immediately attracted to the idea.

“We’ve always thought about owning a business and having something of our own but we never really considered owning a franchise. The retirement conference is what really piqued my interest in franchising and helped me understand what it takes to be part of a franchise,” said Jean.

In addition to the military veterans discount of 20% off the franchise fee, Mary and Jean fell in love with the freedom and flexibility that Maui Wowi offers. They also witnessed the brand’s commitment to ‘ohana and that’s what really solidified it for them.

“The franchisees help each other out and provide information and support- only family does that kind of stuff,” said Mary.

Mary has a background in hotel management and customer service where she spent a lot of her time focused on helping others. She plans to continue connecting with the community and giving back as a Maui Wowi franchisee.

Mary and Jean are going to start their business with the Maui Wowi mobile cart. Together, they plan to work as hard as possible to make this business a success so they can pass it down to their four children.

“When we first started our family, the American dream was to own a house. Now we own a house, so we asked ourselves, ‘What’s the next biggest American dream?’ It’s owning a Maui Wowi franchise!” said Mary.

After attending a comprehensive, hands-on training program, Mary and Jean will be bringing the Aloha Spirit and ono’licious Maui Wowi smoothies and coffees to Georgia.

Congratulations and welcome to the ‘ohana!