Last year, Maui Wowi® was acquired by Kahala Brands™, one of the world’s fastest-growing franchisors. With an even larger ‘ohana by our side, we are continuing our forward momentum into 2016!

Being acquired by Kahala Brands was the cherry on top after some exceptionally big wins as a company. In 2015, Maui Wowi made a valiant push and secured contracts at a number of major sports stadiums and entertainment venues across the country. Increasing our nationwide presence, several franchisees signed contracts allowing them to bring their Maui Wowi smoothie and coffee-serving tiki huts to thirsty crowds. Some of the 18 new stadiums sports fans are now able to enjoy an all-natural fruit smoothie include Paul Brown Stadium in Cincinnati, Petco Park in San Diego, Coors Field in Denver and Target Center in Minneapolis. 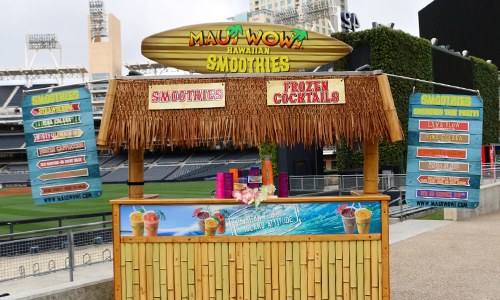 And that was the just the beginning. In June, we opened our first corporate-owned location in Denver. The store in the Lowry neighborhood is also used for product testing and development, as well as a franchisee training center.

In July, Texas couple and franchisees, Rob and Jean McLean, signed on to become area developers for the entire state of Texas. With the McLeans at the helm, that deal increased support to existing franchisees in the Lone Star State, while positioning the company for future franchise growth.

Kahala Brands took notice of these accomplishments and in November, the global leader in the QSR industry acquired Maui Wowi Hawaiian, adding us to its ‘ohana of 18 franchise concepts. Some prominent QSR brands Maui Wowi joins under the Kahala Brands umbrella include Pinkberry®, Cold Stone Creamery®, Blimpie® and Planet Smoothie®.

Maui Wowi reached many milestones in 2015, setting off a chain reaction toward even bigger and better things to come. We are excited to be a part of Kahala Brands. With even more resources now available to Maui Wowi franchisees, we can’t wait to see what 2016 has in store!